Can You Overdose On Shrooms? | Banyan Treatment Texas

Can You Overdose On Shrooms?

Psilocybin is one of the most well-known psychedelics in the nation. It’s currently classified as a Schedule I drug, meaning it has a high potential for abuse with no accepted medical use. However, when it comes to using these drugs, it’s important to ask: “can you overdose on shrooms?” The answer might surprise you.


What Happens When You Take Mushrooms?

As hallucinogens, magic mushrooms can alter your perception of sight, sound, touch, taste, and smell. They can produce hallucinations or the feelings or sensations of things that aren’t real.

While many people claim they take shrooms for a peaceful high, there are also reports of bad side effects of mushrooms like anxiety, frightening hallucinations, paranoia, and confusion. The co-occurrence of these side effects is often referred to as a bad trip.

For thousands of years, mushrooms have been used for both spiritual and medical purposes among indigenous people in the US and Europe. They have a long history of being associated with spiritual rituals and self-discovery.

Many people believe that naturally occurring drugs like psilocybin, cannabis, and mescaline are sacred herbs that allow people to attain enhanced spiritual states. Others use shrooms to experience euphoria and a distorted sense of time.

Many people believe that naturally occurring drugs like psilocybin, cannabis, and mescaline are sacred herbs that allow people to attain enhanced spiritual states. Others use shrooms to experience euphoria and a distorted sense of time.

The effects of shrooms kick in after about 20 to 40 minutes and can last up to 6 hours, which is the same amount of time it takes for the body to metabolize psilocin.1 However, while a mushroom high may seem promising, researchers advise against psilocybin because it can be difficult to measure the dose you’re taking, side effects can be unpredictable, and because the purity of the drug is often unknown.


Can You Overdose on Psilocybin?

An overdose refers to taking more of a substance than the body can handle in one moment. Because drug overdoses are usually reported in cases where people took cocaine, meth, heroin, or prescription pills, many hallucinogen users wonder, “can you overdose on shrooms?”

The answer is yes; however, a magic mushroom overdose isn’t usually fatal. Common symptoms of a psilocybin overdose include:

It’s also important to note that it’s not uncommon for poisonous or laced mushrooms to be misidentified as psychedelic shrooms. Consuming mushrooms that have been laced with other potent drugs can increase the individual’s chances of overdosing as well as dying.


How Many Shrooms Is Too Much?

Considering shrooms aren’t sold or used as tablets or other easily measurable formulations, it can be difficult for users to know exactly how much psilocybin they’re consuming. This is especially true of organic shrooms.

There are also many different strains of psilocybin mushrooms, each of which has its own level of potency. Psilocybe cubensis is the most commonly used strain of magic mushrooms and happens to be fairly potent.

Normally, one dose of psilocybe cubensis is approximately 3.5 grams or ⅛ of an ounce. If we were to apply this dosage to all strains of mushrooms, then we could say that taking double or more than 3.5 grams of shrooms can increase your chances of experiencing OD on shrooms. Taking shrooms with alcohol or other substances can also increase your chances of overdosing, an unfortunately common habit among psychedelic drug users.

Not only can you OD on shrooms, but you may also experience long-term side effects like decreased motivation, depression, impaired memory and concentration, and a disorder called hallucinogen persisting perception disorder, which is characterized by flashbacks of trips or highs weeks, months, or even years after the drug use.

While many claims support the safety of these drugs, the truth is that any form of substance abuse can have drastic consequences. If you or someone you care about is struggling with drug or alcohol abuse, our Texas treatment center can help.

Banyan Treatment Centers offers drug and alcohol treatment in Texas to help people with substance use disorders physically and mentally recover from their conditions while learning how to sustain their sobriety long-term. We even offer family therapy to assist our patients’ loved ones in their recovery from the impact of addiction, as well.


To learn how our drug addiction treatment in Texas can help you get and stay sober, call Banyan today at 888-280-4763. 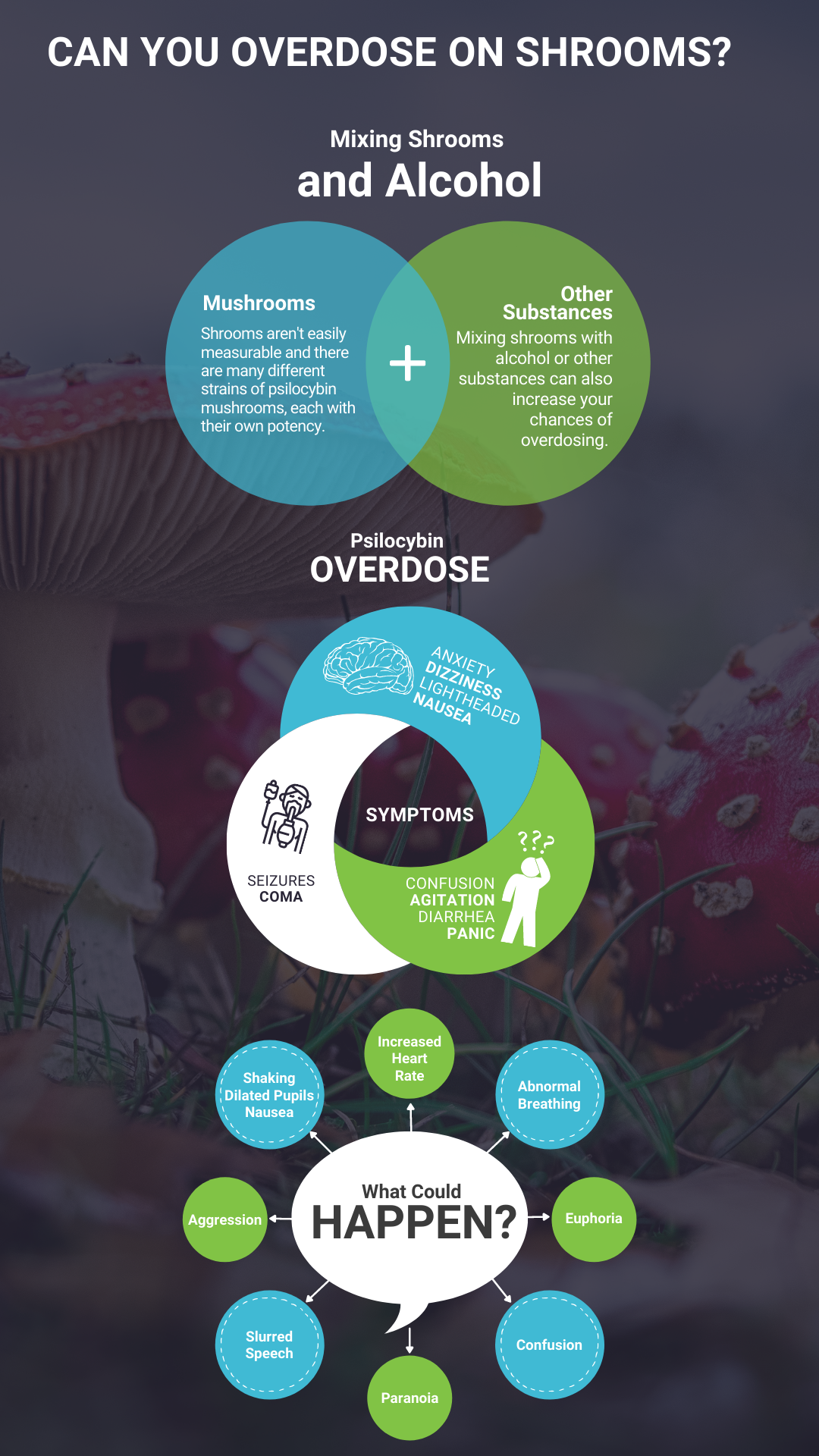 Can You Overdose On Shrooms?